The Soul of an Automobile

For as long as I can remember, I've felt that cars have had a soul. While not in the same sense as humans, I have always tied a personality to an automobile, regardless of make, model, or condition. When I lost my first car to a collision with another car, I lost a part of me. While the insurance company classified it as totaled, today, I would have saved her, out of guilt. I often wonder where the car ended up, whether it still sits in a salvage yard, got rebuilt with a salvaged title, or has long since been crushed.

I view cars with the same philosophy of "if these walls could talk," except instead of walls, I guess you could replace the saying with "if these wheels could talk." The different owners, the different families, the mechanics and shop technicians that have kept the car going over the years, all add history to the car. Each vehicle has their own assignment, be it transporting a kids baseball team, or putting a smile on the owner's face carving corners and pulling some g's racing to the finish line.

Dings, dents, and rust all add charactor to the car, though can just as easily lead to the car's demise. Yesterday, I took my car for it's first wash in months. The winter has not been kind to the body, and the rust is beginning to spread along the door bottoms at an alarming rate. This is where the car's emotions come into play.

Back in college, up at CMU, there was an old car junkyard on Winn Rd. It was the coolest salvage yard I ever stepped foot on, as the cars dated from as far back as the 1930's to the early 70's. As cool as it was, it also felt like a mass funeral, a burial ground, where cars were laid to rest. Here were cars dating back generations, from companies long since out of business. Thousands of voices, whispering with the wind "please, save me."

My down fall is probably the fact that I'd love to save them all, and if not for lack of storage and funds, I'd be rescuing cars until I ran out of both. While I don't share the same love for all cars, there are plenty I come across in my daily ventures, cars sitting undrivable, slowing decaying. I have a good 1/2 dozen cars I'd love to rescue right now if I could, though I'll be lucky to be able to save any of them. Two in particular that come to mind are beyond saving, a couple of mid 60's Mustangs. Left for dead in a Detroit alley. I was fortunate enough to come across the owner one day. The cars were his dad's, and the son still has visions of restoring the cars. Perhaps he lacks to automotive knowledge to bring him to accept, these cars are far beyond saving. Such a shame too, as one is a convertible.

Perhaps this connection to cars is why I recently started seriously considering a new car, perhaps a new Camaro, but maybe a Challenger or Mustang, in the next year or so. I want an untainted car, built to my liking, never used/abused by anybody but me. A car in which I can account for each and every imperfection picked up along the highway of life over the years. I have often said that I could never see justifying buying a new car, as I could easily get a year or two old car in like new condition, while saving several thousand dollars. Now, seeing that my yearly commutes are averaging a little over 2,000 miles, I can see the advantage of having a brand new car. With the proper care and maintenance, years down the road, I can have one of those low mileage gems that you see for sale from time to time. I wanna have that new car bond, take her to the track, and let the car smile ear to ear, and share that car years down the road with my kids, and perhaps even my grandkids, and pass that bond on like a family heirloom. :)
Posted by Supersport at 12:24 PM No comments: 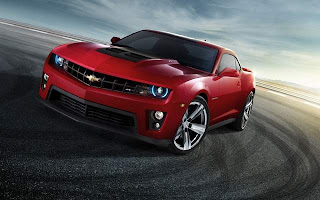 Chevy has announced that the new, top of the line, high performance Camaro will be labeled the Camaro ZL1, producing around 550 hp/550 ft/lbs of torque. Produced in 1969, with only 69 being built, the original ZL1 was an all aluminum 427 cubic inch dragstrip terror. The new ZL1 should live up to those standards.

Some may question as to why the new Camaro is not labeled the Z28. I personally find ZL1 much more appropriate. The Z28 was a road course warrior, with it's high revving 302 small block. The Z28 however was NOT the king of the hill in regards to all out performance. That title was held the the big block powered SS Camaros, COPO Camaros, and at the summit, the ZL1.

Good call by GM, as this still leaves the window of opportunity open for a Z28 to be built. In my opinion, the new Z28 should be more true to it's original roots. Build a high revving 5.3 or smaller engine, lighten up the car buy a few hundred pounds, like the Z06 Vette, and tighten up the suspension for better cornering. You can retain power windows/locks, but lose all the navigation crap, 10 way power seats, and any other heavy options that a dedicated performer does not require. I'm not saying a totally stripped down car lacking A/C and has a radio delete option, but there are many things I could do without. THAT would be more true to the Z28 heritage, and fill a muscle car segment that the industry continues to ignore.

Miss Evelyn tearing it up in a new Camaro...always entertaining!

Posted by Supersport at 11:50 AM No comments:

We are certainly no one's Emerald City

Watching yesterday's Super Bowl, I was very skeptical when I had heard prior that Eminem was going to be pushing the new Chrysler 200, the Sebring replacement. In my mind, I couldn't envision how such a ploy could be anything but a disaster. Once the commercial aired, it stopped me in my tracks. I quieted my guests, hit rewind on the dvr, and watched in utter amazement. Never before has a commercial captured the essence of Detroit, told our story in under 2 minutes, and underneath all of that, successfully advertised a new car looking to help rejuvinate a company. This commercial was a slam dunk, among the best ever made. Not just because I have perhaps a biased view living in Detroit, as this blue collar-hardened steel-American Made concept stretches far beyond the reaches of Detroit. It speaks volumes, that WE CAN still make things here, WE CAN set the standard.

Posted by Supersport at 11:33 AM No comments:

Station Wagons have always been cool in my book. From the California surfer models of the 1950's, and through even the lackluster 1970's and 1980's, where neither power or style were strong points, I still found wagons always appealing to some degree. Even the Griswold family truckster, which took gawdiness to a whole new level, had an appeal. Even though it was a behemoth of a car, it screamed "I own the road, outta my way, me and the family are coming through."

Perhaps the most recent/best re-invention of the wagon proved to be short lived. The Dodge Magnum was without a doubt the coolest interpretation in decades. Dodges efforts proved to be short lived, as lackluster sales made for a short life cycle. Built from 2005-2008, the Magnum was one badass ride. The exterior was in my opinion perfect. The car had the look, the stance, and all the right stuff. Under the hood, you could get all the way up to the 425 hp SRT-8 model. Also availailable in the SXT and R/T model was an all wheel drive option, making this wagon a tank that could plow through even the harshest conditions. The one major complaint I had was the visibly cheap interior, especially the cloth interior. Even with the bland interior, the Magnum is a car that I could undoubtedly slide behind the wheel of and call my own.

Onto the main course, the new 2011 Cadillac CTS-V Station Wagon picked up where the Magnum left off, and then turned things up a few notches. The V option is what makes this car so iconic, as they transfused the blood of a ZR1 Corvette into the wagons veins, bumping the car up to 556 hp, and enough grunt to embarrass most every "sports car" on the road. Mustangs, Camaros, and Challengers, enjoy the Cadillac's tail lights, as that's about as close as you'll get. Only real downside is the price, at $62,000, it's at a luxury level that most of us can't afford.

With numbers like those, I don't think anybody can argue that wagons aren't cool, and they are WAAAAAY cooler than a "Man Van."

Just a reminder that the 2011 Detroit Autorama is just a few weeks away. Always a great show, and arguably WAY more interesting than the North American International Auto Show, I'm as anxious as ever. For the first time in 10 years, I'll be attending the show while having a running/driving classic car of my own stored away for the winter. In fact, I don't believe I had ever attended the Detroit Autorama while my Camaro was still running, only Toledo, Ohio's scaled down version, as I was yet to move to the Detroit region.

This year will be different, as the cars I see, and the ideas I take away, I can actually apply them to my own car. I always enjoyed the Autorama, but it's simply not the same when your ride is not running and in a million pieces. 2011 will be a great year, as right out of the gates, my Camaro is ready to go.

I'll be sure to take plenty of pictures and offer plenty of input regarding the show, as I'll be attending all three days (working) and one day before work, to take all my pictures. I've never attended all three days, so this will be a first for me. Stay tuned.