As 2011 passes us by, and 2012 is about to kick off, I look back on what a great year it was. For the first time in nearly a decade, my Camaro was on the road for practically a full cruise season. Aside from a few cruises I attended w/o my car due to mechanical problems, I was able to hop in my car and go. In addition, our daughter was exposed to her first taste of car shows, with many more in her future!

For 2012, I hope to resolve a few nagging car issues before the season kicks off. I look forward to a cruise season even better than the last. I hope to have a new intake and carb in place within a few months, and hopefully custom headers and rebuilt transmission as well. If I can mark those items off the list, I think I can start to concentrate on a few of the more minor, creature comforts.

2011 also proved to be my most productive year for blogging. I also added my first personal videos to my blog, and look ahead to many more in 2012. In addition to my own personal projects, perhaps the greatest news is the re-start of my dad's 1970 Challenger. After an initial purchase of a couple thousand in parts, another last minute purchase got all the emblems and a new deck lid, seemingly the only body part that needs replaced. I look forward to watching the Challenger come together, and will be sure to document as much of the project as I can to share. While it's highly doubtful that it will come alive in 2012, we hope to be on the road by 2013 by the start of the cruise season...perhaps even shooting for the 2013 Detroit Autorama!

Stay tuned, as 2012 should prove to be an exciting year!
Posted by Supersport at 1:02 PM No comments: 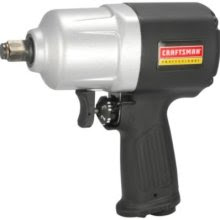 Let me start by wishing everybody a Merry Christmas and hope all my readers have a safe and happy holiday season. This Christmas I supplied the wife with a handful of options on my wish list, all of which were tools of course.

What Santa delivered was at the top of my wish list, a Craftsman Professional 1/2" composite impact wrench. This baby packs 725 ft/lbs of torque, and should be able to bust loose even the most stubborn of nuts and bolts. I had been leaning towards an Ingersoll Rand impact for years, though couldn't beat the price and torque rating of the Craftsman. While I own almost exclusively all Craftsman hand tools, I haven't been a big fan of their power tools in the past, but have had good experiences as of recent, and hope the trend continues. That said, my Milwaukee circular saw I got from my in-laws is the Cadillac of saws, no question about it!

In addition, the wife picked up an LED trouble light, which I was greatly in need of. I can't believe how long I've been getting by without one after my last trouble light took a shit. I'm anxious to get out to the garage and try both out, but instead am taking care of my sick baby girl and wife who managed to pick up a case of the stomach flu. Holiday season wouldn't be complete without a little virus to go around eh?
Posted by Supersport at 3:50 PM No comments:

Saw this ad on Craigslist and had to laugh. I will be honest though, it doesn't look that far off from a Chevy Avalanche! Show truck? Uh, yeah...something like that. Nothing sends the message home that you're getting a show truck more than a dusty hand print on the fan shroud.

I won this truck in a raffle, which means I don't know much about it! Appraised @ $29,500. It has a 350 w/Aluminum Holly Heads, Edelbrok Highrise Intake w/Holly 4 barrel. Asking $10,000 because of appraisal, price is negotiable! Please only call if interested will try to answer any questions you may have. Thanks for looking call Scott @ (734)929-8672 please do not reply with e-mail unless your sending a phone #. I listed this as a favor, the owner of the truck does not reply to e-mails! Thanks again! This is a SHOW TRUCK not a drive around town truck!! 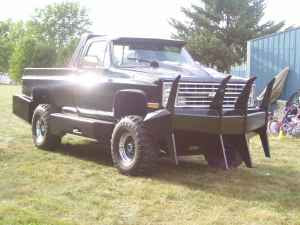 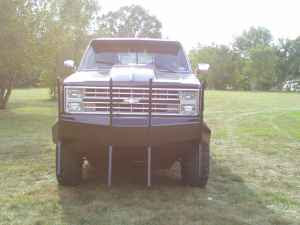 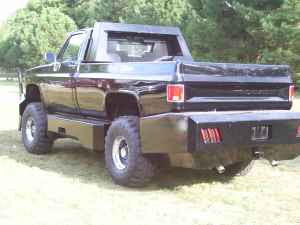 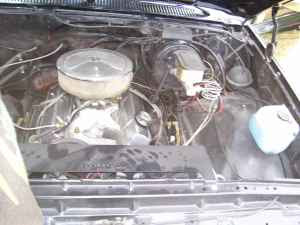 Posted by Supersport at 1:02 PM No comments: 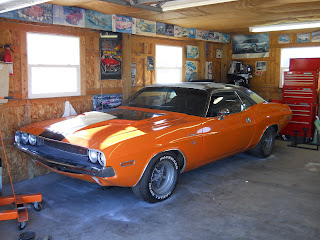 The ball is now rolling. This past Saturday we went down to visit my parents. While my wife and daughter spent the day shopping with my mom, dad and I had other plans. I had loaded up my engine hoist, jack, some tools, and a plan to get the engine, transmission, and driveshaft removed from the Challenger. Having never pulled an engine from a Mopar, I was hoping there wouldn't be too many surprises.
We started with the obvious, removing all the accessories, hoses, and anything else that needed disconnected. We discovered the usual multiple washers used as spacers here and there, though have to say that I was somewhat surprised to find pieces of copper pipe used where a larger spacer was needed. Copper being the soft metal that it is probably isn't the best choice for a spacer. 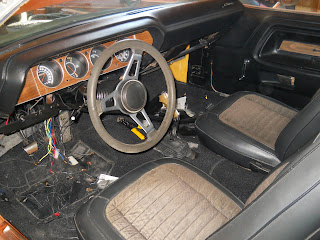 Those are actually charger seats, came in the car. I think we'll likely go with a more modern/more comfortable style seat for the fronts.

My dad's tool collection, as it stands, leaves a lot to be desired. I bought him a Craftsman set of metric wrenches for Christmas or birthday a few years ago, but it's down hill from there, and metric wrenches would be of little use on this project. The standard wrenches he had weren't shorty wrenches, but they were far short of full size, and gave up much in terms of leverage. Hey, I didn't build my collection of tools over night, and I also learned the hard way that cheap/Chinese made ratchets and sockets aren't going to last more than a few uses. That said, we made due with what we had, and improvised when needed. 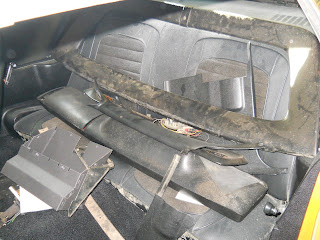 Backseat storage.
My biggest concern was removing the exhaust from the manifolds. My dad just purchased a quality Craftsman Professional 60 gallon air compressor, though hadn't removed it from the crate, installed the cord, and bought a hose. Not to mention, he lacked air tools and I didn't bother bringing mine. That's ok, as I quickly concluded a Milwaukee Sawzall would prove quicker and easier any way, and since we weren't reusing the exhaust, the smarter play. One other small obstacle was the mounting pad for the shifter mechanism on the side of the transmission. The attaching bolts were larger than your typical allen head, and my suspicions were correct, a few sizes bigger than what our tool box had. As an alternative, I simply removed the transmission crossmember, which will be replaced by a new one for the 5 speed any way. Extra storage.
With the accessories, driveshaft, exhaust, and lines/hoses removed, we were ready to remove the engine. I must admit, this engine slid out WAY easier than my Camaro engine, which fights us every step of the way, and makes for a very difficult 1 man job lining up the bolt holes. By comparison, I'm predicting we'll be able to drop a new engine into place upon first attempt. 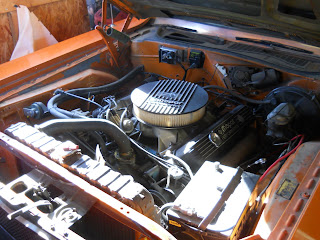 That's not an extremely low profile intake, I "borrowed" the carb a few years ago.
Dad is sold on going the crate engine route, and upsizing from 383 cubic inches. After some searching, I found a place in Lansing, MI specializing in just what we were looking for, Mopar stroker motors! I'm thinking a stroked low deck, which to the eye will look like the 383 we pulled, all while sporting an extra 120 or so extra cubes. Backed up by a 5 speed and either the 3.23 gear in it, or something slightly better, like a 3.55 or 3.73, this car will have gobs of power, and be fun to drive down the highway. 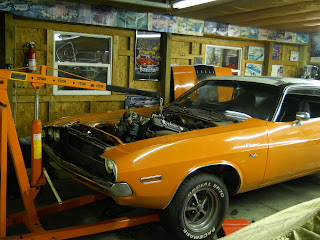 Dad plans to order up my list of parts through Year One by year's end, in order to receive the 30% off offered right now. Unfortunately, all those parts won't go on the car until it's painted and ready to go back on the road. That said, it's either save $900 now, or pay $900 more in the future. Aside from stripping the rest of the underbody and Por-15-ing it, the next logical steps will be suspension (Hotchkis), brakes (Wilwood), and wheels (American Racing). With those three major components out of the way, all that will be left is the new powertrain, body work/paint, and a few interior odds and ends. The goal will be to be on the road cruising by summer 2013, possibly entering it in the 2013 Detroit Autorama! 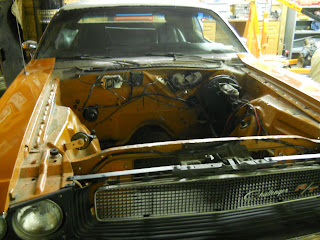 Ready for something bigger and badder!
Posted by Supersport at 10:51 AM No comments:

A few days ago Dodge announced the return of the Dodge Dart, to be unveiled at this years North American International Auto Show. It's interesting that the original "Dart" was a Chrysler show vehicle build by Ghia in 1956. The Dart would later go into production in 1960 and during it's life go from a full-size, to mid-size, to compact. By today's standards, that "compact" would be more on level with today's mid size car. This round, the Dart will be revived as a front wheel drive, 4 cylinder, sub-compact car. A shame really, as I was hoping for something on par with the Dodge Dart I remember. Not that the few sneak peeks of the car I've seen are all that bad. It is actually looking like a good looking car, sharing the Dodge Chargers rear lights. Though why resurrect a car's name that is obviously not from the same gene pool.

All too often car makers seem to bring back names, hoping to build upon a known tradition, when a car shares little with it's heritage. Just to name a few, Ford's 500, Chevy's Monte Carlo, Chevy's Impala (not the 1991-1996, which lived up to the reputation in my opinion), and a few others that slip my mind. While the Dodge Charger has a couple extra doors, I think it has represented the Charger lineage well, especially in a market that overwhelmingly prefers 4 doors, to my dismay. I think automakers just need to put a little more thought into naming a vehicle before slapping them on undeserving cars. Remember the Charger of the 1980's? Enough said.

This is pretty sweet!

Posted by Supersport at 12:57 PM No comments:

The North American International Auto Show in Detroit is just around the corner. Below is a list of dates for the show. As always, I'll attend a day or two and take plenty of pictures. I was excited to hear the return of the Dodge Dart will be on display, until reading that it is a front wheel/4 cylinder powered compact. How disappointing!