I FINALLY came across the details of the show regarding what time it gets underway and goes until. My biggest complaint about Hot Rod's site is that there are no details that I could find regarding entry fees, what time gates open, and what time the show goes until. Here is what I found on the Huron-Clinton Metroparks site.

Where can you see 2,500 to 3,500 street rods, antique and classic automobiles all in one place? The Hot Rod Magazine Power Tour taking place for one day only Friday, June 10 from noon - 7 pm at Metro Beach Metropark, near Mt. Clemens of course!

See, and be seen, at the finale of this rolling tribute to the performance car, the ultimate gearhead roadtrip. This travelling car show, presented by GM Performance Division and sponsored by the Detroit Metro Visitor and Convention Bureau, with finale Cruise Night sponsor, Pioneer Audio, is the signature event of Hot Rod Magazine. Metro Beach Metropark will be the final stop along a seven-day, 1,616 mile trek beginning in Cocoa Beach, Florida with vehicles expected to arrive between noon and 3 pm.

Spectators are free accompanied with a park entry fee. Car owners who would like to bring their vehicles in to show with the other Power Tour vehicles can purchase a single-day registration for $25, which includes park entry, available at Metro Beach on the day of the event only from noon – 6 pm. More information is at www.hotrod.com. All cars, regardless of make, model or year are welcome to be registered, with the exception of rentals which are not permitted.

One last Bonneville inspired car, Hot Rod's F-Bomb. With 1,500 streetable hp, this '73 Camaro is nothing short of amazing!

Posted by Supersport at 10:10 AM No comments:

Perhaps one of the reasons I'd prefer to take my Formula across the flats is due to this Gale Banks Trans Am from years passed. What more inspiration does one need than a stock bodied example traveling just south of 300 mph?

Posted by Supersport at 9:55 AM No comments:

One of the many automotive items on my to do/bucket list is a visit to the Bonneville Salt Flats. Just a visit would not be sufficient of course, but a 200 mph blast would satisfy my needs. Just looking at pictures, reading stories, seeing videos, and watching "The World's Fastest Indian (2005)," leaves any automotive enthusiast salivating for a visit to this unique to planet earth location.

I've pondered many times, bench racing with myself, what I would build, what I'd like to take to Bonneville. While my 69 Camaro would need relatively little work to get it up to speed (no pun intended), I can't help but lean in favor of my 89 Pontiac Formula. Aerodynamically speaking, it has one of the best drag co-efficients of any car built, and it just looks armed and ready to go, prepared to slice through the salt air. Of course it would mean another car with a cage, along with many other requirements that would make it closer to another race car than street car.

My desire only grows stronger with each article I read about "The Flats," and the grassroots racers who make their yearly trek to Speed Week. Perhaps a pilgrimage to the flats during this annual event would at least give me a taste, and an idea whether it's something I REALLY wanna do, before building such a purpose built car. I do however have little doubt that there is any form of racing out there that I wouldn't whole-heartedly enjoy with a big 'ol shit eatin' grin from ear to ear.

Here is an article passed along to me a few years ago. It really captures the essence behind what Bonneville is all about, and the desire for most every gearhead to check it out at least once in their life.

Popular Mechanics - Mustang vs Camaro: All out Bonneville Speed Test

Bonneville Salt Flats
Posted by Supersport at 8:48 AM No comments:

In an effort to both get the word out about Back to the Bricks, as well as to promote Michigan Tourism, the organizers of Back to the Bricks have put together a summer tour of our lower peninsula. Kicking off June 17th, the tour starts and finishes in Downtown Flint. This is one tour I'd like to see become an annual event, as it has the tools to become another of Michigan's automotive events that can attract people from around the world.

Posted by Supersport at 12:36 PM No comments:

What kind of miles are we talkin'?

Posted by Supersport at 12:28 PM No comments:

Email ThisBlogThis!Share to TwitterShare to FacebookShare to Pinterest
Labels: 2011 Dodge Charger Commercial, What kind of miles are we talkin'?

Dodge/Chrysler has been knocking them outta the park with their commercials for awhile now, and this one ranks towards the top of the pack.

Posted by Supersport at 3:47 PM No comments:

We are deeply saddened by the loss of a wonderful, caring, passionate and very talented man, Joe Mondello. Joe passed in the early morning hours of Wednesday, April 6 in Crossville, Tenn., at the age of 75, following complications from surgery. Joe was born on August 6, 1936 in Los Angeles, California.

Joe, also known as "Dr. Oldsmobile", earned an international reputation as a drag racing and the automotive performance expert, guru and master. Joe's passion for all things mechanical, and particularly improving cylinder head airflow, led him to a 54 year career as an engine builder, head porter and later, a teacher. His talents led him to work with some of the most notable race teams and fellow engine builders during the 60's and through the turn of the century. He started racing at age 13, and his professional career started in 1951 working on flat-head Fords for his own '40 Ford coupe for drag racing, as well as for other engine builders. He was nicknamed "Dr. Oldsmobile" for his highly successful developmental work on the Olds V-8 engines.

His passion for excellence lead him to establish the Mondello Technical School in 1996 in California, devoted to teaching the art of professional performance engine building and head porting design to all who came including young men and women who desired a career in the field. The school started in Paso Robles, California and later moved to Crossville, Tennessee. Joe's passion was for those young people in the school. He wanted them to understand what it took to be a professional in the shop and in customer relations. He also extended that passion to teaching many of them how to be a professional as a drag racer. He taught them the technical aspects of their trade (as an engine builder and as a racer) and how to interact with people. Joe is survived by his wife Mary, four children Bernard Mondello, Stephanie Mondello, Gina Ozanne, and Nica Mondello-Gomez and four grandchildren, Nicole Mondello, Ross Ozanne, Adam and Joey Gomez.

Published in the Los Angeles Times on April 12, 2011
Posted by Supersport at 2:12 PM No comments: 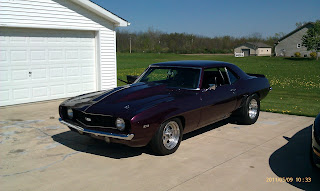 After what seemed like the longest winter ever, my Camaro has returned home. I would have loved to have had it here all winter, as I would have been able to knock out a lot of these little projects that need fixing. Though the alternative would have been parking my 89 Formula on the street, scraping snow and ice off windows, and sliding into a bitter cold car each day fighting off frost bite enroute to work. No thanks, I'll take parking in a garage every time. 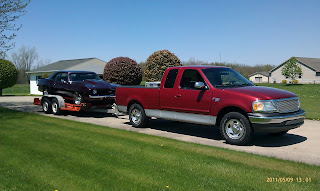 So now that she's home, the laundry list of things to fix seems longer than ever, but we'll dig into that in the coming weeks. Let's take a step back to earlier today. I had hoped to drive my car back up, since I drove it down to my parents last October. One problem, just prior to parking her last fall, I took it down the road for one last blast. While out, something seemed to have went wrong, as she began to stumble at idle, and stumble again as I limped back to my parents garage. Not sure what caused the problem, but it's still present, and seems to be causing an extremely rich at idle condition. With Emma Sue, just over 5 months old, there was no way I was going to find the time to make the 1.5 hr drive down to my parents and figure out the issues in a timely manner, so, I bit the bullet and rented a trailer and brought her up. 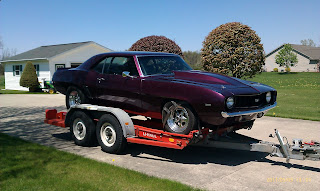 Now, I wasn't about to simply load my car on the trailer and call it a day. My parents are surrounding by woods and corn fields, so breaking down on a back road down there is nothing like being stranded in Detroit along a freeway or rough neighborhood. That said, I fired the beast up and told dad "I'll be back in a bit, I'll call if/when I get stranded." In the back of my mind, I honestly expected to be making that phone call...and of course, I did.

Luckily, I had to make that call because I stopped by a friend's house, who wasn't home, and my battery simply didn't have the charge to crank the engine once stalled. The carb still has some serious idle issues, which is causing an overly rich condition. Cruising down the road, I dropped the hammer a few times...ok, actually only dropped the hammer about 1/2 throttle, but oh my God, this car is more hellacious than I remembered!

700 hp is like nothing you've ever experienced. As it is, with some 275 radial cheapos, you can roast the tires at any speed. While extreme acceleration is still there, I can't even begin to comprehend the kind of g-force this car is going to pull with a beefed up rear and sticky set of tires. Two wheeled launches are practically a given.

I've crossed the line. My car is loud, gets about 6 mpg highway...on a good day, is a real pain in the ass to get in and out of, it will rattle your fillings out, and the engine looks as though it will require constant maintenance to keep it cruising. I had, for a short minute, questioned whether or not I made the right decision last fall, when I realized just how far I had pushed the envelope. Today, those concerns disappeared. The 69 Camaro is by far the most popular muscle car built, and because of that, the market seems saturated with them, and you really have to do something to make the car stand out in a crowd. When I come rumbling down the boulevard, you don't notice its a 69 Camaro, the engine takes center stage, and even the purist of brand loyalists can appreciate that. 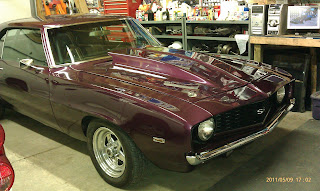 Posted by Supersport at 10:06 PM No comments:

Another site full of cool car reviews and tech videos

V8 TV Show
Posted by Supersport at 2:12 PM No comments:

Truer words have never been spoken.

Posted by Supersport at 11:18 AM No comments: