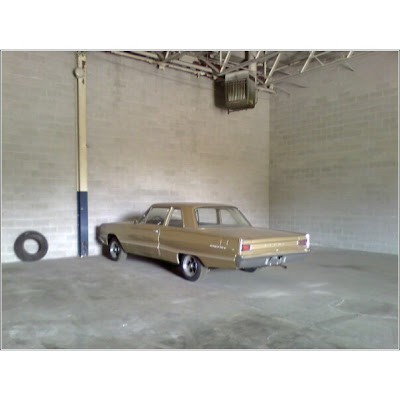 Recently, a coworker told me about a Coronet for sale that was being stored in my company's warehouse. According to his observation, it was in good shape, and sounded well worth the $6,200 asking price. It had a slant six in it, but that could easily be swapped out and replaced with a much more respectable V8 of a larger displacement. I made a call to a friend, who was VERY interested, so much so that if it was a solid car, he'd be willing to buy it without a second thought. 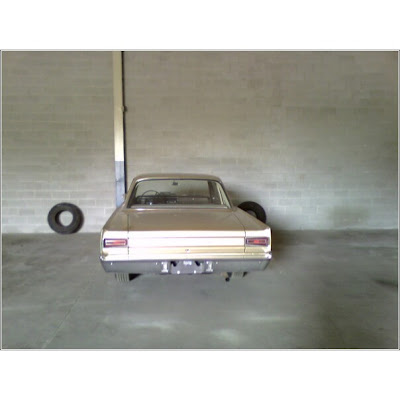 Today I managed to make it over to the warehouse for work. Initially, I thought the car looked pretty solid as I walked up. Without much inspection of the body, I dropped to the floor to check out the underside. I few quick pokes found that the floor was pretty rotted out in several places. The frame where the torsion bars attach were ate up by rust pretty good as well, as was other parts of the structural support.

Such a shame, as I would guess that the odometer reading 60,000 miles was very likely original judging by everything else I saw. The interior looked all original, was in very good shape, and had that very musty old car smell too it, which is most likely attributed to the rusted out underside in this case. The doors, jams, and under the hood all looked to be in very good condition as well. Closer inspection of the body shown signs of a quick and dirty half assed paint job. While whoever laid the paint down seemed to do a decent job, the body man didn't know what they were doing. The bondo in the wheel wells was very apparent, with the back sides of the wheel well lips packed a good inch thick. 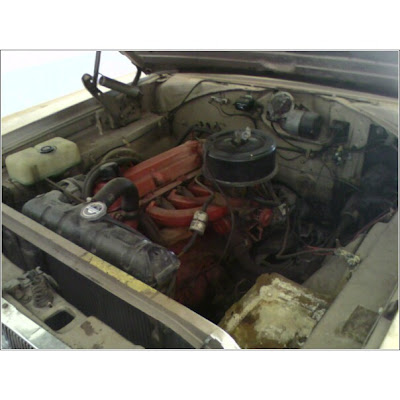 The slant six, as well as everything under the hood, all looked very neat and tidy, just like it just came from the factory. The rear end was whatever the weak rearend is that would come behind a slant six. I didn't count, but it looked similar to GM's 10 bolt, with the cap on the rear, as opposed to a pig style setup.

It makes me sad to see cars like this, as they may be on their last leg without the right owner. Everything that I saw could be fixed, the car could be saved, but it would take a lot of effort by somebody willing to put in the time and money. Instead of the right kind of owner, somebody who knows little about cars will likely buy it, over paying of course, and drive it until the car literally splits in half from rusting out. Neither my Camaro nor my Challenger was in this bad of shape, yet it is the kind of project I would like to tackle some day. I guess I always look at it as, somebody has gotta do it, or they'll end up in the scrap yard and nobody will enjoy them. Perhaps I enjoy the car hobby so much because I've never looked at it from an investment point of view. In fact, many of my modifications will actually lower the value of the vehicle, but that is what it takes sometimes to achieve my personal tastes.
Posted by Supersport at 6:20 PM 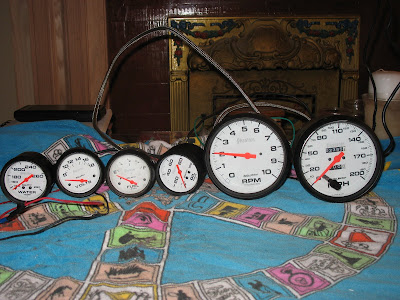 Hoping to continue at least a minimal amount of work on my Camaro each week, this evening I dug out all of my gauges and began cleaning them, then wrapping them carefully for storage until later use. This is something I should have done years ago when I took the car off the road.

In the process of removing them from the car, likely due to my impatience, the beauty rings managed to get scratched up, so some touch up flat black paint will be necessary before they actually go back in the car. It would probably be a good idea to wait until I have the dash layout figured out first though, as more scratches will likely occur. After the gauges, my next project will likely to be to clean up the rear glass, removing the silicon, and prepare the body surface for re-installation. Then all that will remain is the front windshield, which I need to buy yet.

I'll probably get started on checking out the wiring harness after that, which needs a couple of repairs prior to re-installation. A few grommets had worn out, and the wires rubbed on sharp surfaces in a couple of areas, nothing major, but they need fixed just the same.

I'm still pondering whether or not to stick with the B&M Megashifter I have, as I always thought it was a very slopping shifter, and have since found multiple other shifters I like much better. One step at a time though, as I have plenty of work to go, and plenty of time to figure out a game plan. Expect updates more often, as while I've said so in the past, this time I really am going to continue the progress on a weekly basis until it sees the road once again..
Posted by Supersport at 7:43 PM

Full day designated to the Camaro

Well, what can I say? Maybe my trip to a cruise night on Friday had a little bit to do with it, though I had already planned on working on the Camaro on Sunday, perhaps it added a little extra inspiration. I had a game plan lined up before I even headed out to the garage, and I am happy to say that I accomplished everything on my list I had planned.

I dug the exhaust system out of the basement, first hosed it off, then took an angle grinder to it with a wire wheel on it. After stripping the full exhaust system clean, I then painted it with a high temp black enamel. You may wonder why I would bother painting it after all the work of stripping it. Well, between the road grime and automotive fluids that get cooked occasionally on the exhaust, it's been impossible to keep it looking good. I had painted the exhaust with a silver paint in the past, but chose black this time, so it'll blend with the underside of the car. 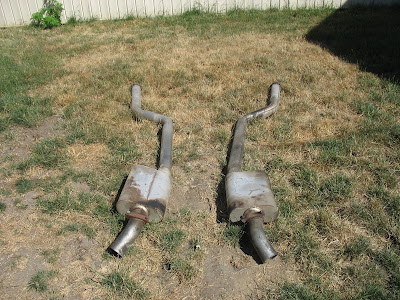 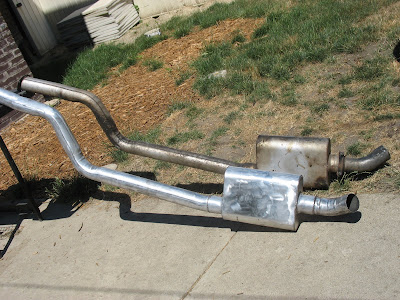 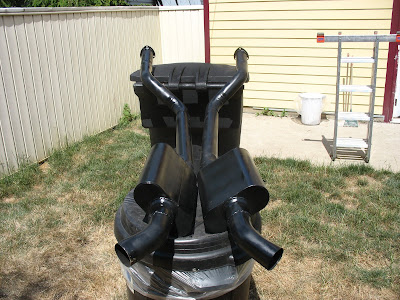 After that, I did a quickie wash of the car itself, as it was getting really dusty. Unfortunately, it's still got dirt on it, and water spotted. I'll have to make a second attempt when I have time to actually soap it up, as all I did was spray it down with the garden hose. Plus, without any front and rear glass, I'm left mopping up the interior floor pans after each and every wash. At least it looks better now than it did. 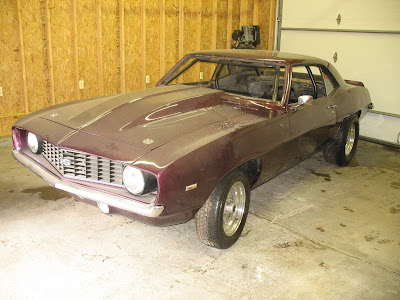 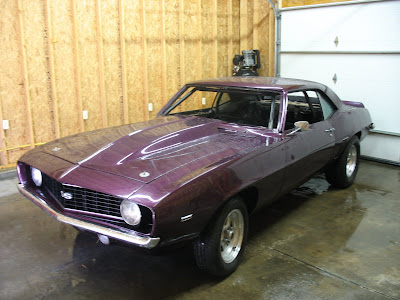 Next on the agenda was installing the seats. I did this for two reasons, one, I was tired of looking at them all wrapped up down in the basement, and two, it looks more like a car with all the seats installed. As you can see, the rear seat will essentially be useless, I'm not even sure if the dogs will be able to fit back there or not, as the bars really get in the way. For right now, I think I'm going to keep the backseat, as it makes the car look more streetable than an all out race car.

The front seats I simply put in place, not bolted in. The seats will come out and back in many times before it's all said and done. I still have some welding to do, as the dash needs tack welded in many places from when they cut it up for the cage. I also need to figure out what I'm going to do for a dash, since the stock unit will no longer fit, again, because of the cage. Considering I can only weld good enough to get me by, and I don't own a metal brake, my customization ability is somewhat limited. I've considered buying a metal brake, but will likely try something different. I may simply go with a mostly flat piece of sheet metal, with bezels for the gages and the radio along with switches in the dash. Relatively simple, straight forward, and easy. I'm going for functional, not show winner, judged shows were never my cup of tea.

So as you can see, the interior still has a long ways to go. I need to install sound deadener yet, find some matching plush carpet, cut up my current dash pad, then buy a new one after I've got it fitted, and do the same to it. I need to figure out my speaker arrangement, since the bar went through my speaker holes in the package tray. This car HAS to have a radio, as without it you'll get a massive headache from the 3 inch exhaust and even the shortest of trips. I need a plenty powerful system to drown it out. I also need to put a few more coats of paint on the cage itself, as it's barely been covered. The door panels will be an issue, as there isn't room for the inside door handles because of the cross bars. I'm either going to shave the handles, or perhaps make some custom interior panels with billet handles and window cranks. So you can see, I have my work cut out for me. 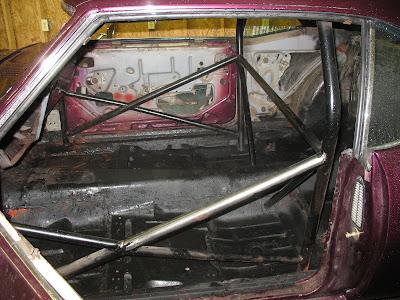 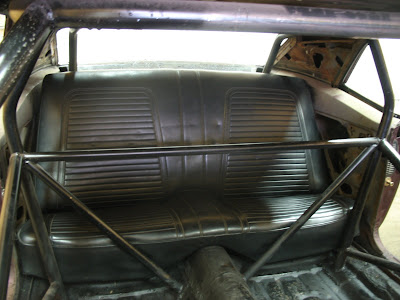 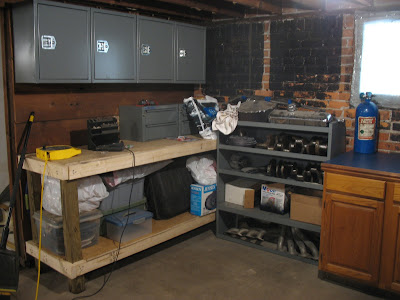 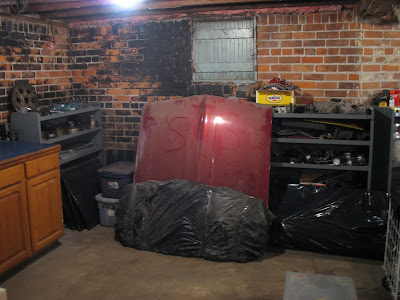 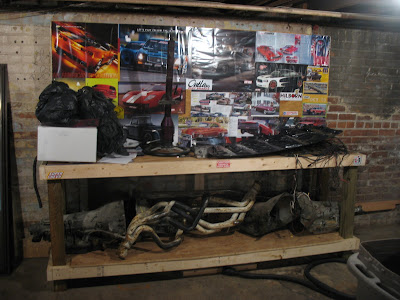 Posted by Supersport at 8:49 PM